When my son was about 4 weeks old, safely asleep inside the house in his crib, I went out to sweep the carport, which was also the main opening into the back yard patio. A stray dog was standing there on the patio giving me a strange look, and I was in the breezeway, so I approached it with the broom still in my hand, gave it a shake and said, “Scat!” thinking that would be sufficient to send the mongrel packing. He bared his teeth and growled at me menacingly. In.my.own.home.yard with my baby mere feet away!!!

I still cannot find words for what welled up in my new-mom heart at that moment as I flew at that creature with absolutely no regard for my own safety and with every intent to dispatch him to the Rainbow Bridge (my arse!) if necessary, but he saw my mama grizzly crazy eyes and beat feet. I went inside and trembled from the adrenaline pumping through my veins and was awestruck at the enormous emotions overtaking me. I would have killed that dog with my bare hands if I had to. I knew I could if I needed to. I’ve never gotten over the wonder of that realization.
The threat was real. He was a bad dog, on the hunt for trouble. I did the instinctive, if dangerous thing: I protected my child (even if he was in no real danger) and I met the force of that bad dog with superior force and not a little righteous indignation. I did it right then. I didn’t shelter in place and call the dog catcher. I didn’t call for a community meeting to demand that all my neighbors’ dogs have their teeth extracted. I acted with what was in my immediate power to do.
We have the power to defend our children… and the right … and the responsibility. It falls to us who are good to do something that’s hard and good, if not nice: Use armed force to defend our children in their provably “unsafe place” called school. Let children know that we have their back RIGHT NOW, when it counts. This has to happen before any more finger-pointing or policy talk or phone calls to the dog catcher. Bad dogs exist and hoping that nurture and official policy against dog-bites is the solution will not save one life.
Besides, truthfully telling kids there are bad guys in the world is the perfect way to teach them about heroes. Because we need heroes right now, not politicians.
.

Thank you for your service. I am so sorry for all of us. We have failed you as a nation, as neighbors, as voters, as caretakers of Liberty. Pray for us, you are in the better place now. God bless you.

God Forgive Us All

Or, y’know, a truck-mounted machine gun:

Mad Max Hardberger, in an undisclosed location that is a popular shipping hazard, has fallen in with the locals, it seems, and is quite happy to pose in a calm display of superior firepower. Looks like a book cover in the making. . .

His company is hiring, btw.

What was the legend that the hapless political wonk invoked a year or so ago? The Romans would roll into town and crucify the first five people they laid hands on and then they’d have little trouble from the rest of the proles? Something like that.

Over at Pat Dollard’s place there is a fine sentiment showing manly, warrior support for Ted Nugent’s “Concord Bridge” comment.  I love it. But much of the bravura and dispute in the comments is about firepower and armed conflict. We’re nowhere near that point yet. I think the Dumbed-down Party will allow us to keep our guns for another year or two. They still have much work to do, and many examples to set up to bring about the desired fear. And if not outright fear, then the desired sobriety of a man considering the ends of one’s actions.

However, ALL OF US are already being made examples. Daily we comply with all sorts of indignities and insults to our sovereign sense of human rights. We answer intrusive questions, we suffer molestation in public by the TSA, we sigh at bureaucratic sand in our economic gears.

But here’s the thing: Obama won’t send an army, he’ll send your neighbor, the one with the IRS job. Or you’ll try to travel and a local NHS satrap will show up to investigate you, express serious doubts about your online comments, and ask you to get in his car, quietly please, as your wife and kids look on– and your neighbors whisper, “I always thought something was strange about him.” Some municipal quisling will bring four or five officers and arrest you for making a video, or for refusing a smart-meter on your home. You will be shamed in the local paper, not the New York Times.

Death-or-glory charges are for the fresh young recruits. Cannon fodder, sadly. But their story comes long after the thousand paper-cuts of the Diktat. The apparatchiks are your neighbors. And you won’t raise a gun to the man with whom you’ve shared a meal.

If Solzhenitzyn’s “how we burned in the camps later” essay doesn’t WAKEN us to the fact that it’s not “them” but it’s folks right here, next door in our communities, then we are doomed to lose this country. You have friends with public sector jobs who can’t afford to lose them. Hell, the garbage collector doesn’t want to lose his job. He’ll report you for not recycling if it’s required of him. Nice people will unwind the strands of liberty one “concern”  at a time.

Brave talk, this idea of forming a militia to counter such tactics. But they’ll never use the tactics you’re imagining. It won’t be a bang, it’ll be a whimper. Freedom is fragile, and it’s lost one city block at a time. One tax return at a time. One example at a time.

Addendum: I say all this to illustrate the immediate need to communicate, in real space, with your neighbors and family. To speak up, loudly if necessary, at community events and city hall meetings. Win hearts and minds NOW. Speak up NOW. Count the cost, NOW.

I’ve been spewing on Twitter and it hasn’t been pretty, either. But first, I give you John Bolton’s latest comments:

And don’t call it, “-gate.” That’s the Left’s gambit and it’s a disservice to Ty Woods and Glen Doherty, BIG DAMN HEROES, one of whom was found slumped over his gun after 7 hours of gunbattle. Obama’s cold-blooded decision to not act is a politically gutless and self-serving sin of outrageous neglect. Someone suggested Benghaziquiddick.

I suggest we call it treason.

So what was it, really? A lack of will to engage and bear the political consequences of being proved wrong about al Qaida? Perhaps it was a scheme. A murder-by-proxy with unfortunate collateral; Obama never figured that some heroes would show up. And when they did, they found themselves to be “not optimal” bumps in the road under Obama’s ever-widening bus. Even if it was a cock-up of unimaginable proportions, Obama was at the helm of our Ship of State and under the stress of authority chose instead to go to Vegas, baby! for some much-needed sucking up to by high-rollers to affirm his manhood. Obama’s self-medicating on adulation now, instead of choom.

And Hillary!? She’s got lawyers and folks who are trying to spin her way out of it, but nothing, NOTHING will change the fact that she stood next to the caskets of our honored and heroic dead and butter wouldn’t melt in her mouth as she LIED her ass off. I need the inimitable Gut Rumbler to weigh in with his signature epithet for such a woman: bloodless c*nt. Somewhere, Vince Foster is mustering a grim smirk.

Meanwhile, call for protests at local media outlets are being tepidly put forth amongst the dextrosphere. It’s about time, dammit.

Politics is local. The attacks happened in Benghazi. The lies happened in Washington DC. The cover-up is happening on your TV right now.

Go forth and make it viral!

An affront to courage and determination.

I despise those two gaping, tranquil square holes in the ground in NYC. They nauseate me with their deceptive peace and calm and endless waterfall.

Obama tried to hijack our collective misery and turn it into butterflies of Hope and service. Well, I’m not done with my grief, I’m not blind to the Truth, and I’m not bowing to anybody.

He wants it to be a day of service? I want a day when we serve it up COLD. And finally.

UPDATE: Shoving it in our faces, our President couldn’t resist posting this today.

[Some idiot from Syracuse piled on a Breitbart thread and took the occasion of the many paeans to Neil Armstrong to vilify every Conservative for their tacit approval of “Big Government” and the expropriation of our money without our consent. It’s a fair point to argue at any other moment, but it wrung from my melancholy frame of mind a defense of our once and corporate greatness. His reply was to say that I must admit that it does “take a village.” My lesser answer is below this awesome video you probably haven’t seen yet:]

Neil Armstrong didn’t do it for himself. We, the People,  hired him to strap dynamite to his ass and guide the controlled mayhem all the way to the moon. And back. He didn’t do an end-zone dance, didn’t brag or high-five; he included ALL of us in that moment.

We willingly supported and corporately benefited from every technological advance from that program. Our return on that investment is still paying off, unlike our investment in public education.

Most importantly, it was the vision of a nation united by a President who actually was a uniter. Your “light-bringer” (interestingly, “lucifer” translated to English) has brought forth, from the pit of his penurious soul, a director for NASA whose mission is to make Muslims feel good about their giving the world another zerO.

“It takes a village” refers to child-rearing, not nation-building. We have a nation of grown “children” who would step into a tin can with dynamite underneath them only if they thought it’d get a million hits on youtube, or get them their own television show.

Armstrong stepped into that capsule because he was an excellent engineer and didn’t have to worry that some affirmative action village math was carrying him to the moon, but real, solid, irrefutable data. Data gleaned from unflinching, uncompromising mathematicians who never had village moms telling them they were special snowflakes.

They likely had Dads, not villages. And they knew that once that rocket was lit, they had better be right.

Bow to nobody. 30 seconds of truth. You can handle it:

If it’s a soundbite #War the MSM wants, I say, let ’em fly. We can argue the details after we win.

About everything in general and Paul Ryan in particular: 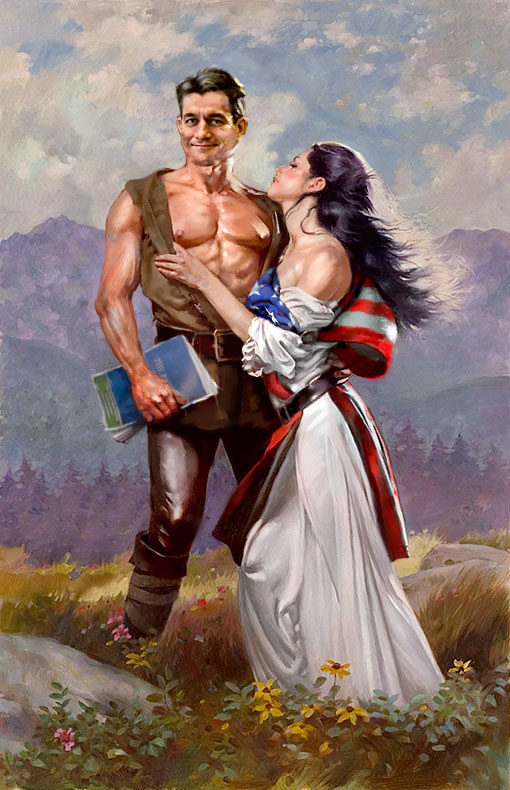 She dreamed of a man who could control her unbridled spending. She longed for fiscal discipline for the first time in her life.

Mad props to the mad skillz of the Stoat Weasel.