Because I’m a giver.

From 1965, when the older generation was stupid, square, self-centered, and embarrassing. An old-fashioned, quaint, simplistic and eerily prescient rant:

Feel free to add supporting evidence in the comments.

Warning: I am going to criticize Palin on a technical foul. Constructive criticism, but I’m going to make it painful, because she hurt my ears and I’ve gotta give some back.

I love Sarah Palin and don’t see any other politician with her moxie. I think she’s head and shoulders above the rest of the field. Her talking points in Wisconsin were in perfect pitch. Saying that, I’ve tried twice to listen to her WI speech and I just can’t. Her handlers need to keep her away from venues where she feels she must shriek to be heard.

It’s crucial for a speaker to know the strengths and weaknesses about the physicality of their voice. She knows this. She has to know this as a former Media person.

It is not her best.speech.evah. if it’s physically painful to listen to. In a fight for the details nothing is more devastating to a speaker than to have something vital to say, but not think the sound design is important enough to bother with.

Good lord, if someone decides to auto-tune or remix that din of a speech it’ll be tough to outdistance her from it.

Iowahawk shows what Steven King can’t even guess at:

-total combined annual player salaries for NFL + MLB + NBA + NHL = $8.6B. Enough to run the federal government for about 20 hours

-Global annual profit of Walmart: $12 billion, enough to run the government about 26 hours.

-Japan tsunami damage estimate: $310 B, enough to run the US govt for March. Also less damage than the US govt caused in March.

-Assuming $15k average value, total value of all automobiles in the US = $930B – enough to keep the govt operating until June 14.

-Total home property valuation for the city of Beverly Hills CA: $30B, enough to run the govt 3 days.

-Total annual spending at the Mall of America: $2 billion, enough to run the govt for 5 hours.

It’s not going to add up. Not for generations, at this rate.

Of course, the sad truth is scarier than the combined wealth of all our richest citizens. Mary Katharine Hamm has the goods on all the whiny celebs who think more taxes on the rich will fix things. 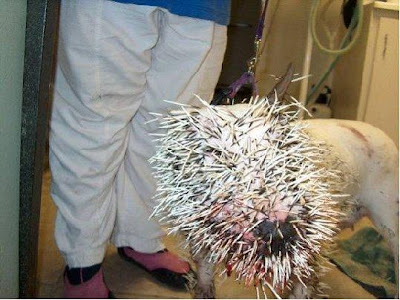 Seems a porcupine trespasser loaded up this poor dog; a dog with more heart than brains. It also looks as though the dog didn’t take a few fired off quills as a warning and went in with jaws snapping, actually trying to grab the beastie. The vet sedated the pup and pulled 1,347 quills from his skin! 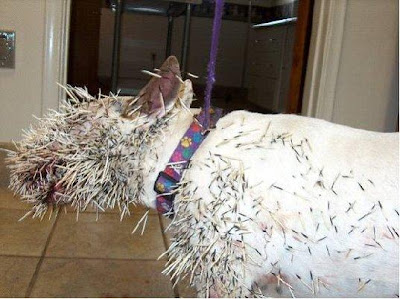 Man, that’s about one quill for every day since Obama was elected until we kick his butt to the curb, btw. Or a quill for every ten pricks in D.C. And just about as painful. I’m off to find some fine sedative to alleviate the suffering.

Update to make you feel better: From Urban Legends:

…these pictures are authentic. They were originally posted by the dog’s owner on a community message board on May 25, 2005. The terrier’s name is Inca.

“Thousands of quills were embedded even in her tongue,” her owner explained. “The vets worked for quite some time to get quills out and even still could not get them all. The ones that are left will work themselves out over time. Inca is home and on antibiotics and pain killers.”

In a follow-up post dated July 13, Inca’s owner reported that “she is just fine and has just the odd broken bit come out once in awhile. Other than that she is back to her old self.”

If we’re so farookin’ evolved as a species, how is it that we can still somehow manage to accidentally chew a hole into our own cheek, or bite our tongue, or pierce the inside of our lip while eating. What is up with that?

To Hell with health care, what I wanna know from my 24 regular readers is, “what bit you?”

Apparently, there is a show about injuries received from ferocious animal attacks and bites. Carnage, scars, oozing wounds, paralysis. You know the folks who watch it are the same folks who love peeling back a scab just to see if it’s healing in there or if it’s full of putrescence and bile.

I know that Geckofeeder’s brother prolly has the best story yet, making history out of the most dubious sort of fame.

And I know a friend’s daughter made the local news with a shark bite on her ankle. Years ago my brother lost some vital shin skin and muscle to a brown recluse spider in Texas, and my sister was temporarily blinded by a scorpion sting when she was a toddler in Corpus Cristi.

I’ve had a spider bite on the nape that gave me horrible headaches and neck spasms for a year, and having raised miniature dachshunds, I can attest to more than one doggie bite, but nothing serious. I wonder how common it is for us to find ourselves at the receiving end of the food chain?

So, what bit you? Let’s see what sort of feral world we really still live in. Let’s say whatever bit you has to be bigger than a virus so that we don’t have to include Politicians.

— looks exactly as you think it would: like someone was trying to cut a biscuit round outta this guy’s leg.

(No, it’s not as gross as you might think, but then, I’ve worked in creating reference materials for wound-care providers so I may not be a good judge of gross.)

The Gecko-Feeder’s brother has become a bit famous. Apparently, it’s the first recorded case of a human being latched onto by one of these critters:

Just one more critter for Jimbo to have nightmares about.

The music really makes this video:

Found it at SNOTR.

I found this Bas Rutten video amongst my bookmarks and it still makes me smile. I’m pretty sure it was the incomparable Bane who first linked this. It’s safe for work, but the F-bomb gets dropped one time.

It’s been over three months since Bane’s passing and his family must still be reeling from the loss. Everyone has likely forgotten that his wife and kids are struggling to make it. If the New Year affords you an opportunity, try to remember all the good stuff Bane brought to your computer and drop a little something into his tip jar.