Go ahead, enjoy and celebrate a day that keeps the Mayans cryin’ because they lost their civilization when they put chocolate in their corn mush milk. It’s as awful as it sounds. Here’s something much sweeter:

Maine, of all places, has got talent.

My day started with me waiting at the last intersection before my driveway at work, only to watch a motorcyclist halt between two opinions; that of stopping for the light or proceeding. Alas, his hands moved faster than his brain and he locked up the front wheel just enough to send him into a wobbling endo off of his bike, making a full cartwheel into the intersection not 20 feet in front of me. And the rest of the four stopped lanes of traffic. We all sat stunned at this one-man accident, but even I could see that he was gently used by the asphalt. Not so his bike, unfortunately. Gasoline leaked everywhere. But he was up and others helped him move it out of the road before the 55 mph soccer moms began to stack up behind us.

Now, I have just received a communication from one of my most favorite bloggers, apprising us of his rather spectacular accident today, wherein his beloved bike took a hit for him, broke the front fork and sent him high and flying. Now he’s out of the emergency room and likely to feel like a Red Shirt from Star Trek by morning. I believe he’ll say more and post pictures when he’s ready, but I don’t think he’ll mind me asking you to send up some good thoughts and prayers for the Irrelephant. And in spite of his blog subtitle, he matters very much to very many. 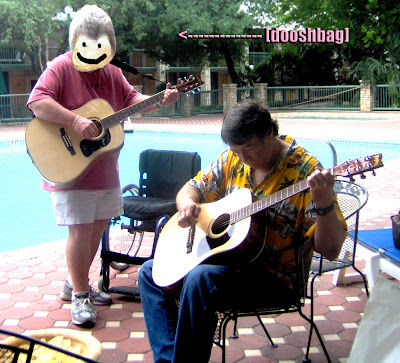 To one of the Famous Elderly Brothers, Jimbo, pictured above with the great farookin’ hair, in a photo I stole from Erica.

Go over to Parkway Rest Stop (not what you’re thinking) and wish him all the best.