Insty posts a link to this torture device disguised as an ergonomic chair.

Seriously? For $8500 I could buy a horse and join Ann Romney in dressage competition.

No, it’s not the jaw-dropping sort of customer interaction like at Lee Ann’s, or like the “teg supporb” horror stories from Sheri. I have been hired into a small, quiet office. The outlier of a larger company across the Southeast, it’s an unassuming little entity of four persons, two of whom are married to each other in a passive-agressive love fest of co-dependence, ego, and insecurity; with a side helping of kinky tawdriness thrown in. I can’t quite place it yet, but I think they’re swingers. No, really.

My first clue could’ve been the wife’s sprawling her short body and broad ass across the large tables where I and my new admin co-hort (she hired me and refused to let them meet me before hand, and refuses to tell them anything about me personally)  were poring over blueprints. Wifey simply lay down on the table and rolled into various poses as though she were a chanteuse on a piano, while commenting on the blueprint detail. She’s an engineer, according to the many letters after her name. Socially awkward or mid-forties existential  crisis? Who knows; either way, she doesn’t have the body to match her fanciful imaginings.

I dutifully kept my eyes on my work, sneaking only a glance at my comrade as if to say, “You never told me any of this when you interviewed me, you bitch!!”  She stifled a scream, but you could see she was relieved to have backup.

When wifey assumed an upright position on the table in front of us, WHERE WE WERE SEATED, she switched to a cross-legged position– which took some doing, in her short, teenager-frilly skirt. I was praying she wouldn’t flash her cootch at me. I was all out of one-dollar bills.

Fast Company describes it as “The Verbal Tic of Doom.”

As part of my ongoing series (yeah, right) about job hunting, please consider why you didn’t get the job: you sound like you’re a twelve year-old that’s been gargling bourbon for years:

Idiocracy. Don't Let It Happen To A Country You Love

Did it scare you, too? I thought I’d been asleep and when I woke up is was like November 30th or something. Man, the MSM has really, really grown accustomed to holding their ankles.

Oh just, “let that pony run” as they say. Let the Democrats believe they are winning the war against morality.  Let them think that the whole world is where they are in believing that we’re well past caring about body parts or “appropriateness” and we’re well onto our way to abolishing any distinctions in age.

Yep. Let the Dems have him as their man in Washington. [Extreme warning! NSFW and eye bleach has been found to be an ineffective antidote.  The naked pics are bad enough; I’m talking about the one of him making some sort of open-mouthed grimace of grossness. *hurl* hurl* Gah!]

Let the Dems rehab him, if they can. In fact, I’m betting that if they think they have actually gotten away with it, it won’t be long before Woody Allen and Roman Polanski team up to campaign for Anthony Weiner’s re-election.

Another report from the front lines in the territorial struggle for Elbow Room!

Today I went to WalMartian Land directly from work in order to get a prescription filled. Not, it was not some lovely painkiller or floaty pharmaceutical, which is not to say I couldn’t use one.

Anywhats, I waited and waited my turn. Standing back behind the red line, don’t you know, giving space and privacy to the person in front of me at the counter.

My turn! I get up to the counter and begin a consultation. Out of nowhere a bling-ed out chick on her cell phone gets right up behind me and is yapping so loud I can’t even hear myself. The pharmacist and I struggled through details above the noisy din at my very back. Finally I turned to Ms. Oblivious and said, “would you please move back and give me some privacy here?”

Yeah, she was all, “Oh I’m sorry, so sorry!” and already I liked her better than the asshole from yesterday.

You gotta fight for your right to exist!

And a propo of nothing, what the heck is that nasty perfume/body spray that every.single.Black.woman or man drenches themselves in nowadays? Some sort of lavender reek. Really, really strong. And both women and men wear it. It was all throughout WalMartia. And at work, we have a shredder guy that comes in and we have to air out the office when he leaves. It sucks all the breathable air out of the room. The grocer guy wears it. The woman in the next car wears it. It is ubiquitous around West Ashley. The occasional white person might sport it, but it’s definitely a Black preference that I don’t understand.

I don’t know if you can die from second-hand smoke, but you can sure choke to death on whatever that crap is. I don’t care what color or sex you are, that aroma is NOT sexing up the room. It smells like a cheap toilet cake.

[Repeating this from Nov. 2008. I figure it’s right about now that he’s lining this up for implementation. The GOP handed him the guy he wanted for preparing to pack the courts; he’ll be needing some authority to back up the onslaught of fiats and decrees. No time like waiting for the Republicans to get all het up about politics for Obama to quietly work his plans under the radar. All I know is that camouflage is the new chic in my decidedly Obama Democrat neighborhood. Enjoy!]

SHOCKING. Just when you think he can’t say anything more frightening. This is real, and it should stop you in your tracks; Democrat, Republican, Independent, Media, everyone. Let’s put aside our differences about who is selfish or overpaid or undeserving, and let’s agree that this is the worst idea to ever be uttered seriously on our soil:

He’s already guessed that our Armed Forces won’t carry out his Almighty and Unopposed Will, so he wants friendlies in his corner. Down the line, we’ll have a Civil War to rival them all.

Even scarier? The people present seem to know what he’s talking about, not surprised or even asking for an explanation.

Who the hell is this man listening to, that would tell him such an idea is good for a Republic?

Meanwhile: Yes, I’m unafraid to link the Vman, who nails it rather succinctly.

Mike Wilson says his fashion sense has no room for an armband. Heh.

Peggy Noonan must be drinking heavily tonight. And Chrissy Buckley, too. Have they bought into “access” the way CNN did in Iraq? Are they listening to Wagner as they slip into a blissful unawareness of their weakness?

Update: Looks like Obama’s “force” already has its first bit of hardware:

The Newest Google Plane is a Fighter Jet. 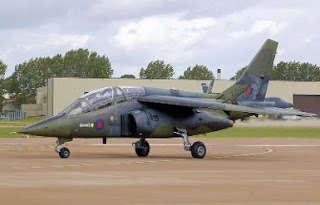 Someone alert the morons at Ace’s place.

Get over yourself. Most of it is repeating crap that’s everywhere on the ‘net. Pick three and make ’em worth reading. Or phone it in with viral videos. I hate coming home to see some of my favorite blogs have become repeater stations for every.possible.item of interest. I want to read them, because they’re usually good articles, but when I see more than five, “mark all as read” is my only recourse. I’m tired, cranky and at the end of a long day and I just want to read some good, provocative or personal thoughts from people I respect. I don’t need to make any more decisions for the day or scroll through endless entries.

More is not always better. Self-filter before others do it for you. Oh, I know I’m being ridiculous, but you might as well hear what goes on in my head when I see my blogroll at the end of the day.